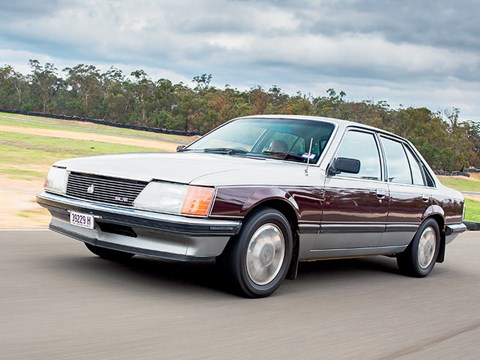 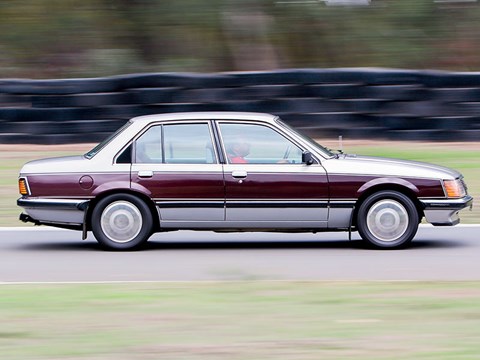 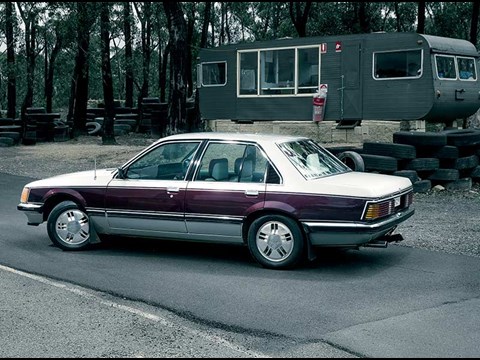 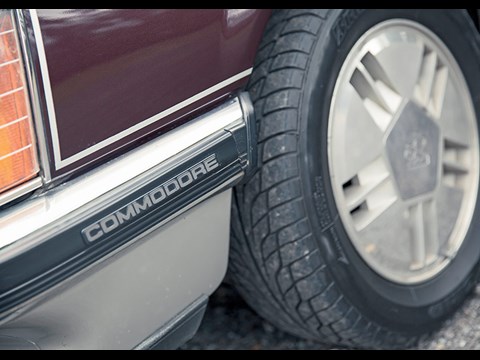 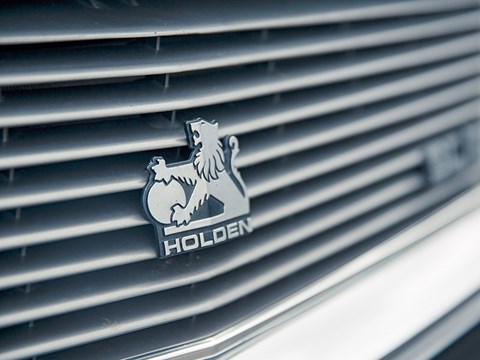 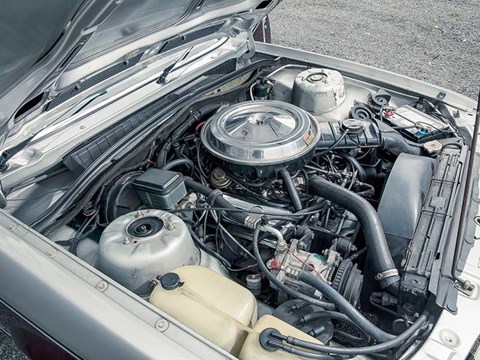 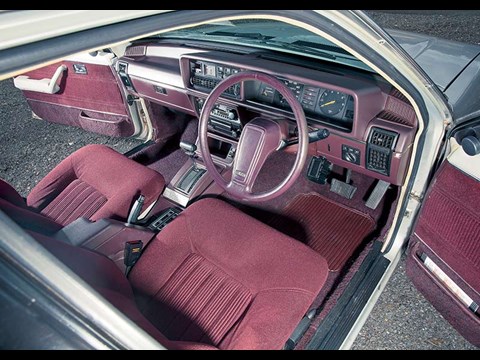 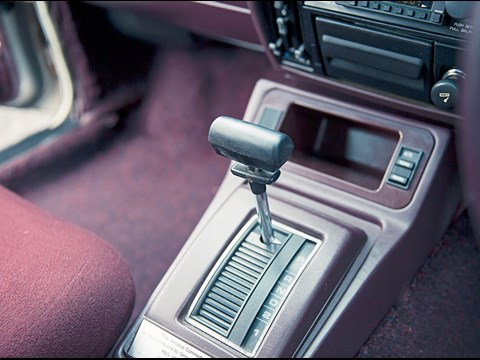 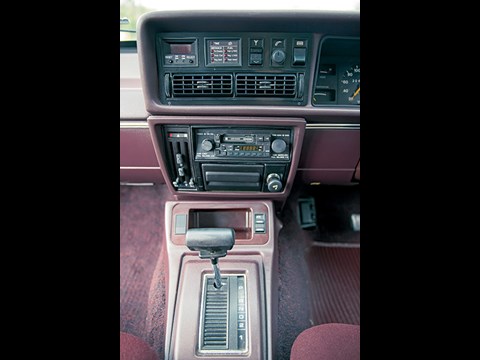 The Commodore finally lived up to its euro aspirations with this terrific two-tone tourer...

Holden had been banging on about the European-ness of the Commodore pretty much since the original VB model had been launched back in late 1978. But with the VH SL/E of 1981, suddenly the Commodore could talk the talk and walk the walk.

While the rest of the VH (the third variation on the original Commodore theme) line-up consisted of the usual suspects, it was the SL/E package that gave the whole range a lift as well as presenting family-car buyers with a truly aspirational Holden.

Yes, you could still get a VH Commodore as a rather dreadful four-cylinder or with the 2.85-litre six (now with the option of a five-speed manual, of course), but the bigger six (the 3.3-litre) and both V8s (4.2 and 5.0) were available in SL/E trim. By this stage of the game, the writing was on the wall for luxury cars with manual gearboxes, and the VH SL/E was a three-speed auto or nothing. Most buyers were completely okay with that. Anyway, if you wanted a VH V8 manual, there was always the SL/X or the mighty SS.

But probably the thing the VH SL/E will be most fondly remembered for is that remarkable shadow-tone paint option (originally introduced on the VC Commodore, but made famous by the VH). By splitting the car in two visually with the bonnet, roof and bootlid in one colour with a contrasting shade on the lower panels, Holden instantly set the SL/E apart from the VH pack as well as the rest of the car world in general.

Popular colour combinations were metallic blues, greens and lavenders over silver. Fifteen-inch cast alloy wheels completed the picture. And you know what? They still look great to this day. You didn’t have to option your VH SL/E in shadow-tone, but it turns out you were a mug if you didn’t.

The point of this car was that it gave new meaning to all that hype about the Commodore being a world-class piece of kit. And driving one even now will confirm that. The 3.3-litre versions seem off the pace in 2014, but a 4.2 is smooth if not especially powerful, while the burlier 5.0-litre does the best job of hustling you along with a surprising level of refinement.

And because the VH was really only a facelifted VB, all those early-Commodore virtues remained. Stuff like the fact that it was closer to 1300kg than 1500kg, and that the rack-and-pinion steering gave good accuracy as well as a measure of feel, even in power-assisted SL/E form.

Even today, a well-sorted VH SL/E will be a nice drive and, even if it isn’t actually fast any more, it’ll still make for a decent set of family wheels. And a shadow-tone car still makes a statement in street cred; just like it did back in 1981. Heck, even those relatively loud interior colours are making some kind of a comeback.

The VH SL/E was the last and finest of the first phase of Commodores. By the time the VH – a second minor upgrade on the 1978 VB – arrived in October 1981, the wider Falcon had established itself as Australia’s top-selling car and Holden’s product planners were hard at work trying to make the Commodore feel and look bigger – hence the six-light VK in March 1984.

But not everybody wanted the Commodore to change much. The VB original had set a whole new standard three years earlier and, frankly, it was only clever marketing that had enabled the Falcon to overtake its rival in the sales charts.

Perhaps the best way of illustrating how superior the Commodore was as a drivers car – as opposed to one that would accept a (reluctant) mid-place adult across the rear seat – is to revisit a cover story I wrote for the June 1982 edition of Modern MOTOR. The coverline was ‘SURPRISE’. The comparison was between the new XE Fairmont Ghia ESP and a VH SL/X 4.2; the surprise was that the Ford won, the first time in years that a Falcon had outpointed a Commodore in a direct comparison.

But it wasn’t a fair test. The XE was the first Falcon to lose the rear leaf springs in favour of coils with Watts linkage. The premium ESP (European Sports Pack) added Bilsteins, Scheel seats and assorted other fruit. But the SL/X was only the second-top VH behind the SL/E. The (six-cylinder) test ESP cost $16,399 to the optioned SL/X’s $14,858.

The XE upgrade gave Ford Australia a competitive car for the first time, but only in premium spec and when tested over rough country roads, where it proved more stable than the Commodore. "If we did all our driving round town we would choose the Commodore, but to drive to Cape York it would be the Falcon, thank you very much," I wrote.

At the time of launch, the VH SL/E was markedly better than any Falcon. Big news was the standard trip computer, one of the best available. The Shadowtone two-toning was introduced with VC and carried over. It was coolish in the early 1980s, and borderline hysterical now.

If he’d had his way, chief stylist Leo Pruneau would have introduced more change with the VH facelift. Drawings abounded. In 1978, Hideo Kodama (on exchange from Germany with Phil Zmood, who would succeed Pruneau) sketched a VB update with a Ferrari-like grille and a ‘flick’ tail. But all Pruneau got was the more tapered nose with cleaner, leaner grille, the Mercedes-style tail-lights, and fiddling with the badges. The prevailing (complacent) school of thought at the Bend was that the Commodore was so bloody good, there was no need to do more than fiddle around the edges.

Engineering a German Opel to accept the weight of an Aussie V8 was a massive challenge, but one that was vital if the Commodore was to survive as a Holden.

The VB SL/E V8 was marketed as a performance car and values have climbed appreciably. When the VH arrived in 1982 minus the 5.0-litre engine (it was added later) or a manual option, its focus had clearly switched from sports sedan to affordable luxury.

However, the VH variant with a prestige edge quickly fell from favour and SL/Es have so far struggled to climb back above their original new-car prices. Almost certainly, our ultra-rare ‘dealer incentive’ car would be the exception. 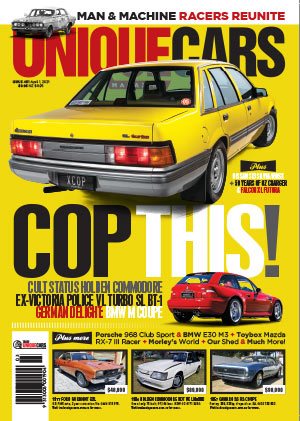 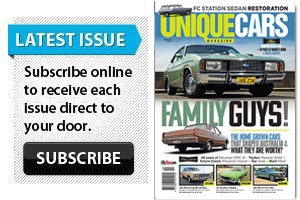